The newly released Google+ is Google’s most confident retaliation to the stronghold that Facebook has over social media. It is a fascinating combination of Facebook-like social media and Google’s search capabilities, resulting in a more interactive experience.

The first step to Google+ is putting yourself out into the world—you have to make a profile that includes very basic information and a default picture. If you think about it though, you’ve already done this through Facebook and Twitter hoping that people would find you on Google. If they’re smart, Google+ will allow you to sync your profiles automatically. After that, you can choose your friends and how to categorize them. This part is called “Circles” and it’s kind of like a futuristic throwback to a buddy list. You can sort people into different groups you name by dragging their pictures into the groups (for example Homies, Chillers and Breazies). While I’m not impressed, there’s arguably a lot of potential to this kind of functionality.

This becomes clear in the next feature, aptly titled “Hangouts.” This is kind of like a buddy list that specializes entirely in video chat, allowing either circles of people or individuals using Google+ to “hangout” face-to-face through video. I could, however, see this becoming annoying if certain people try to (sorry mom) “Hangout” all the time.

The simplest feature is called “Huddle,” and is in my opinion the most useful. With Huddle, you can text multiple people at once, creating a “chat” (like a private version of AOL circa 1995). Because it sends the messages to your phone, “Huddle” is the best feature for you if you’re not so tech-savvy but want to feel a part of Google+ at the same time.

“Sparks” is kind of like an RSS feed, Twitter, and Google Instant mash-up. It’s basically a search bar where you can type in any key words you’d like and “follow” those keywords across all mediums, so that anytime there is something new regarding those topics, you’ll be updated.

The final feature of Google+ is “Instant Upload,” which does exactly what it claims to: after taking a picture or video on a mobile device, it is instantly shared to Google+, goes to your friends’ news feeds, and sits in your Google+ account. 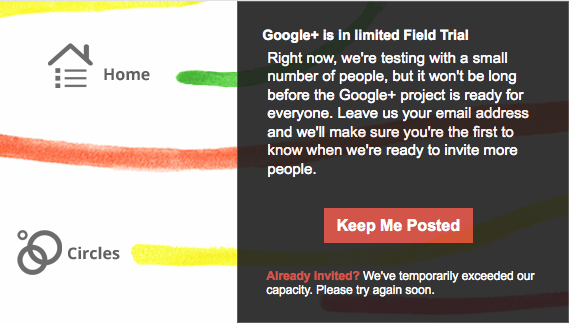 In just a short amount of time, Google+ has already exceeded its user capacity

Overall, I think Google+ has a lot of potential even though there is still much to be desired. Are the features rich enough to warrant a change as dramatic as switching from Facebook to Google for social necessities? Will people use both Google+ and Facebook? Only time will tell, but it appears that this is just the tip of iceberg when Google confidently boasts, “this is only the beginning” on their website. The potential can be unimaginable if there are enough users, but until then, you can find me on Facebook.