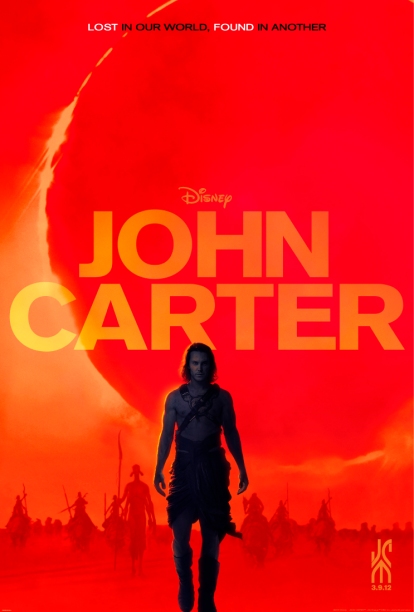 Before I go any further with this blog, I would like to let the reader in on a few of the other working titles that did not get chosen for this blog.  I believe that in doing so, you, the reader, will have a better idea of how this film affected moviegoers.

True, these are some fairly cruel titles, but just remember that I didn’t use any of them.

Now, on to the nitty gritty.  In trying to sum up the one major problem with John Carter there is one word that fits above all others—confusion.  Forget the fact that the plot of the movie forces the audience to believe that there are several different species living on Mars, a planet that educated viewers know to be devoid of life, or that the first 20 minutes of the film revolve around a minor character in 19th Century America.  The real question has always been ‘Who is John Carter?’

Many people who sat through all 139 minutes of the movie are still confounded by that question.

It is easy to blame John Carter’s disastrous box office results on some of the more minute details, but the real reason that this film lost so much money is because Disney kept funding its production and marketing, even after clear signs that they should cut and run.

“When Walt Disney Co. executives gave the greenlight to the project,” as the LA Times reported last week, “they hoped they were launching the studio’s next big franchise.”  Suffice to say, the studio had high hopes for John Carter.  The movie was set up to be another big-budget flick from Disney and was meant to be the first in a series that would create theme park attractions and drive the sale of merchandise.  It’s a strategy that has worked well for studios in the past and Disney wasn’t going to take any chances.  They recruited Andrew Stanton, director of acclaimed movies like Toy Story and Finding Nemo, to head the project.

From the get go, John Carter was a ‘perfect storm’ of financial futility.  The award-winning director had never before directed a live-action film.  The executives in charge were used to working in television and had never worked on a project of this scope before.  The script itself went through several different versions as it was delivered all over Hollywood to try and find someone who could produce a workable screenplay.  The coup de grace was when the marketing team was scrapped and replaced just a few weeks before the promotional material for the movie was set to be released.  “The worst thing that can happen to a movie is the marketing team changes midstream,” said Peter Sealey, marketing strategist and former marketing president at Columbia Pictures.  “It’s disheartening for the filmmakers, for the talent.  They lose belief in the film.”  By doing this, the movie ended up with several different marketing strategies, none of which seem to tell the audience just who the hell John Carter was.

John Carter could have slipped into the annals of history as just another bad movie.   But it has instead become one of the biggest flops Disney has incurred in a while for the simple reason that they kept pouring money into a project that had all the signs of failure.  A spotty script, costumes that were just too ‘Disney-ish’—these are what make the movie bad.  The fact that it lost over $200 million is what makes it infamous.  Better luck next time, Disney.  Everyone makes a few mistakes.